The building known as Kunsthaus Tacheles (Originally named Friedrichstraßenpassage) was built in 1908 as a department store in the Jewish quarter of Berlin. During World War II it served as a Nazi prison for a short while. Under GDR authorities it housed the Free German Trade Union Federation (FDGB) along with various other activities such as a travel agency, an artist’s school, a technical school for foreign trade and economics, and office spaces for RFT (Rundfunk- und Fernmelde-Technik), a company dealing with radio and transmission technology.

The building deteriorated over the course of the next several years and it was later partially demolished. In 1990, two months before the planned demolition, an artists’ initiative occupied the building as a protest. The group tried to prevent the demolition through discussions with the building management in Berlin-Mitte, which was legally responsible for the complex, by registering the building as a historic place. The planned demolition was not delayed however, until they managed to get the Berlin Round Table to issue a last-minute injunction.

The artists’ initiative named itself Tacheles stemming from the Yiddish phrase ‘to speak Tacheles’ meaning to directly tell the blunt truth due to the problems associated with free speech during GDR times. Many messages in music, film and art had to be hidden ambiguously. Breaking through this ambiguity in art was a goal of the artist group. From then on, it went on to become a central part of the art, activist, exhibition and communication scenes in Berlin. It also provided housing and workspace for its resident artists. Over time, the group's name changed to the building itself.

In 1990 Chema Alvargonzalez made an installation in the central court of the Tacheles building; the ruins left large holes that were illuminated with red lights. The work celebrates the beauty of the ruin, provoking us to consider possible uses for the structure in its present state that contrast with the memory of its former use. The sensation of an inferno of bombs and flames is conveyed through photographic images of the installation, inviting for further reflection in the spaces of our collective memory to create new realities that shape our history. 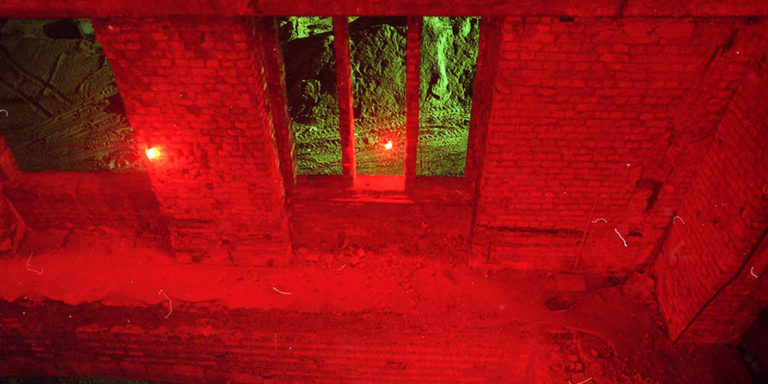