From the day we checked into this hotel, on Wednesday December 5th, and throughout our stay in this room, we mapped the geography of our movements.

The room became a ship that transported us across all that we were perceiving, and which we expressed afterward in words and images.

Our meetings with friends, our walks through the streets that surround the hotel and the train station over which the hotel is built, comprised, during these days, the geography through which we travelled. The different situations that we experienced created within us a special relationship with this space, this capsule where we found ourselves contained. Through the window, we imagined ourselves travelling all the cities represented on the maps that we hung on the wall.

We lived two realities: one real and the other imagined; the real one in focus and the imagined one out of focus. We travelled by means of books that we found, stories told to us by friends, and we constructed a microcosm in which we ended up feeling at home in a parallel city.

No longer static and enclosed, the architecture became a ship, converting itself into a lighter, more ductile element.

We have built a second skin, an extension of our projects and dreams. This second skin has extended itself throughout the room as if it were a map where the co-ordinates between words and the images create a personal universe, one in which two continents rotated around a narrow isthmus: her and I. 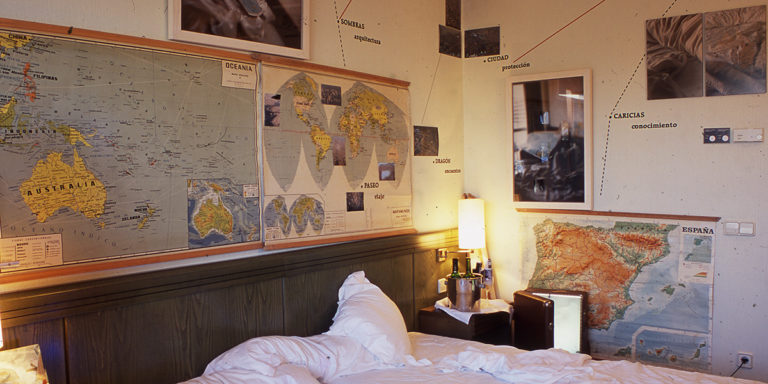