“Zeit Lesen” (“reading time”) is an installation that contrasts two elements. One is a vitrine of photographs and sound bathed in a sea of blue light. The other element, ascending a stairway, is a cascade of books employing the decorative principle of “being in the light” against a background of existential investigation.

The big words surging from these books reveal a contradiction between religious fundamentalism and simple realism or relativism. The search for an objective relationship between the sign and the signified becomes lost in uncertainty.

Light and sound, forms of the visible and the sound, frequently make up Chema Alvargonzalez esthetical shelter. It is from them that he develops the particularity of its installations in situ. With the banner saying “Abwesenheit” (“Absence”) and 54 red neons lights Chema Alvargonzalez covered and interpreted in 1992 the building of the old Spanish Embassy, located in Berlin’s Tiergarten quarter. The sounds, which came from the inside of its solid architecture, product of arrogance and totalitarism, acted as an expressive talking dialogue.

In 1993, the artist made the façade on the “Kunstpeicher” building shine with countless of neon flames in the niches of the windows of the building. Opposites were a banner with the word “Ausschub” (“Committee or Commission fee”) written on it. He refered to the existing tendency in Eastern Germany of imitating, one of the civil causes which bring unity about against the authorities and the malleability of remembrance.

“Zeit Lessen” (“Reading Time”) is the compensating name Chema Alvargonzalez has given to “Le Shuttle”. The sublime tension created between the material, the sculptural quality of an autoilluminated piece and the immaterial and diffused presence of light (which can experienced at the entrance of the first study) guide the observer towards the installation of the same room where an ascending cascade of united books combines the decorating principle of “being in the light” with an existential inquiring end. The lighting space is designated as one of attention and concentration, free from images, while those books hermetically closed develop a metaphor of the ideas and dreams that live trapped inside them. The logic of the lighting space and the logic of the opened space make up a game full of cross references and reflexions in which its combines the potential meanings integrating it in an ambivalent way.

Big words emphasise the contradiction between fundamentalist religiousness on the simple realist and relativist subject. The search for a one way relationship is lost in uncertainty. 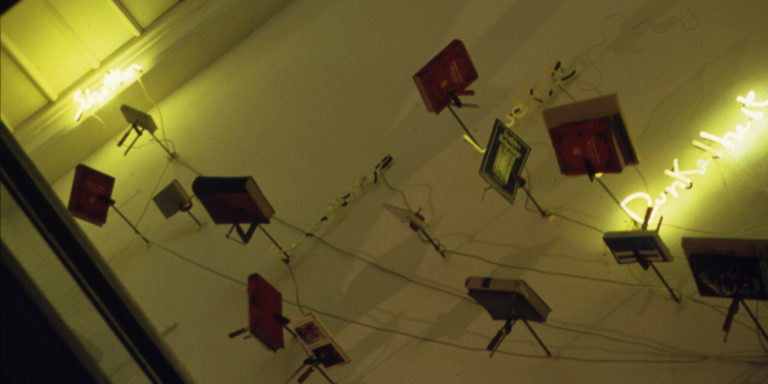