(Station Westend) A stop on the road

Chema Alvargonzalez introduces hersef with light and sound in the territories of memory as a way of prospecting for the intimate. With a particular interest in the intervention in open spaces, the artist has managed to incorporate in his work the urban environment, and especially the architecture, in installations like "Abwesenheit" and "Temps de pas". The language of hidden feelings, the passage of time and the precariousness of our existential situation are reflections that often run in his facilities.

Westend is a station from which many East Germans fled to the West. An illuminated shelf with photographs is installed at the (closed) platform exit. The black and white photographs are fastened to the metal structure and to the glass shelves by means of mandrels. In these photographs, one can recognise, in addition to the chaos, dispersed objects such as pencils, bits of paper, junk, pieces of broken glass, a pair of men’s shoes, a photograph of a woman and a book. These objects appear repeatedly from different points of view. The ownership of these seemingly haphazardly documented, illuminated and reflected-upon objects is uncertain. The book is the only one that we can recognise with exactitude: Walter Benjamin´s Angelus Novus. Associations come to mind immediately. In 1940, near the train station of the border town of Port Bou, Benjamin died while fleeing Nazi Germany toward Spain. Entry into Spain was denied, and, without anywhere to go, Benjamin committed suicide. The electric lights illuminate a chaos that, from afar, recalls this flight of exiled Germans that led to Benjamin´s death. 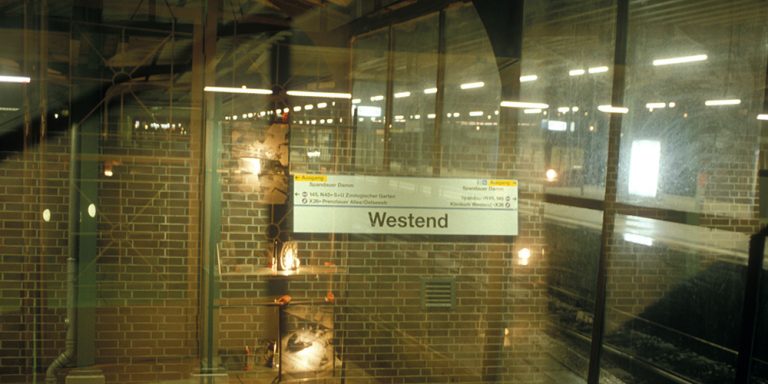